Home/Medicine and Research, No Category/Zhong Zhong e Hua Hua, the first cloned monkeys such as Dolly the sheep

It happened in China, at the "Chinese Academy of Science Institute of Neuroscience" in Shanghai and the study was published in the famous magazine "Cell", creating a stir and not only in the scientific world: two monkeys were cloned for the first time with the so-called technique somatic cell nuclear transfer (SNCT). 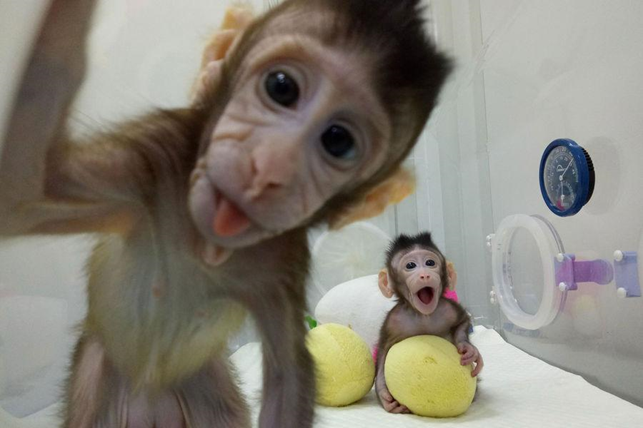 The two monkeys, of the Macaca fascicularis species, they are the first to have been cloned via somatic cell nuclear transfer (SCNT), the same technique used for Dolly the sheep (Image: Xinhua/Newspictures)

However, it should be noted that Zhong Zhong and Hua Hua are not the first monkeys to have been cloned.

Already in 1999 Tetra had been obtained, a macaque cloned in the USA using a technique called embryonic splitting, which mimics the process that occurs when identical twins are generated (homozygous) in the womb, but which allows for a maximum of four identical individuals to be obtained.

The importance of the birth of the two Chinese monkeys is due to the fact that for the first time non-human primates were cloned using the same technique used for the famous Dolly sheep in 1996 to Edinburgh. This year somatic cell nuclear transfer it has been used over the years to clone many animal species, but never before has it been possible to apply the technique to primates.

The SCNT is based on the transfer of the nucleus, and therefore of the genetic material present in a somatic cell (in this particular case we are dealing with fetal fibroblasts) in an egg cell deprived of the nucleus. In simple terms, the DNA of an adult cell of a donor monkey is inserted into an egg cell of another monkey; the oocyte is then implanted in a surrogate mother, and the individual who will be born will be genetically identical to the monkey that donated the nucleus of the initial fibroblast.

The problem that researchers had found up to now with primates is due to the fact that, compared to other species, in monkeys there are many more epigenetic DNA modifications, which made the technique ineffective. The DNA in somatic cells is in fact modified according to the function they perform in the body, and this reprogramming, called epigenetics, was avoided by Chinese researchers by treating donor cells with specific epigenetic modulators.

In reality, even in the case of Zhong Zhong and Hua Hua, the success of the technique was very low, with only two individuals born on more than 300 installations. However, the Chinese researchers managed to avoid that the epigenetic modifications present in the DNA of the adult donor cell could interfere with the efficiency of the implant.

The advantage of being able to use the SCNT technique also on non-human primates will in the future be that of being able to create many identical individuals to have standardized animal models for the study of many diseases.. In fact, it will be possible to reprogram some genes of the clones, for example with the Crispr-Cas9 technique (and Clustered Regularly Interspaced Short Palindromic Repeats, which consists of a precision intervention that allows the targeted correction of a DNA sequence) to have disease models that can be studied in a reproducible way, from cancer to neurodegenerative diseases.

However, there are many doubts also coming from the scientific world itself. For example, such standardized models may not be ideal for drug testing, today it is increasingly directed towards personalized therapies based on the genome of individuals. And obviously there are also many ethical issues raised by the cloning of a species so close to man.

For the moment, however, the scenario of human cloning is unlikely, although theoretically possible, and little Zhong Zhong and Hua Hua will be closely monitored in their growth to ensure that their physical and cognitive development is the same as that of other monkeys their age..