The origin of multicellular life forms

The origin of multicellular life forms

What allowed at the evolutionary level, the appearance of multicellular organisms? This question, remained unsolved for a long time, may have finally found an answer. A recent study has in fact revealed the origin of one of the essential events for the existence of multicellularity: the correct orientation of the mitotic spindle. Let's try to understand what it is.

During cell division known as mitosis, a structure composed of small protein tubules called a spindle is formed, which mainly allows the equal sharing of DNA between daughter cells. It was discovered as in multicellular organisms, the orientation of the spindle in space follows non-random directions, but determined by the arrangement of the surrounding cells, that send specific positional signals. This process is very important because it allows the maintenance of an organized multicellular structure. Its malfunction can in fact result in tumors, developmental disorders and problems with cell differentiation. But which molecules allow the orientation of the melt?

A role of the protagonist is certainly played by a complex that includes a protein called Dlg. The latter in fact has a portion that interacting with other proteins, can orient the spindle, anchoring it to areas of the cell membrane specified by signals from neighboring cells. By analyzing the sequence of this particular portion, the researchers therefore found a remarkable similarity with another protein with a totally different function, guanylate kinase (gk), present in all forms of life. The portion of the Dlg protein appears to be present only in animal cells, of filasterea and coanoflagellati, an evolutionarily ancient class of unicellular organisms that may occasionally form multicellular structures.

Such evidence suggested that the two proteins may have evolved from a single ancestral protein. To understand what event brought about this transformation, scientists deduced the primordial sequences of Dlg and gk, making use of statistical and IT models. Starting from these sequences, they then synthesized DNA encoding the two proteins that, once expressed, have been purified and characterized. The results obtained finally allowed us to reach a’ important conclusion: part of Dlg actually originated from one or more mutations in gk.

In fact, it seems that the portion of DNA that contained the instructions to produce gk was accidentally duplicated and that one of the copies underwent a further mutation capable of totally modifying its function. This event would have occurred before the appearance of the last common ancestor of animals and coanoflagellates and after the separation of the mushroom kingdom from the animal one, ie about 600 millions of years ago. Since coanoflagellates use the flagellum to form spherical multicellular structures, it is thought that in the descendants who presented the mutation, this orientation mechanism has become as obsolete as the scourge itself . Indeed the mutated gk protein, losing its ancient function, it would have developed some degree of affinity towards some molecules associated with the membranes and the spindle.

Ultimately, this transformation would have allowed single-celled organisms to correctly orient the mitotic spindle and to reach a degree of structural organization efficient enough to allow the existence of the first multicellular life forms. Evolution would then have allowed the formation of increasingly complex organisms over time, including man. [after which a spontaneous restoration of the shortening process was observed] 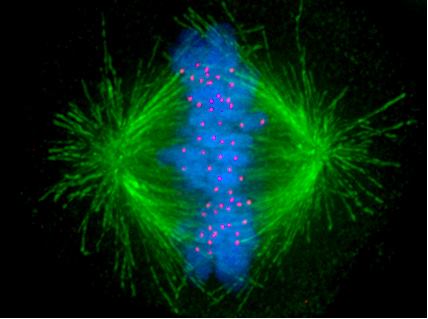