Depression and walks in the woods

There are diseases that do not leave scars, that do not require plaster, crutches or patches, but that cannot for this reason be ignored.
Psychiatric disorders are this: they are invisible to anyone without an experienced eye, but there are, and they are dangerous.

DEPRESSION, for example, is often underestimated!

Because it is so easy to say to a depressed person “go for a walk in the countryside!”?
Simple: because you have no idea what depression is.

Good, let's explain it, but not in an easy way, not with cartoons that confuse depression and sadness, empathy with conditioning and friendship and beautiful relationships with antidepressants. Let's explain it for what it is: a difficult thing!

Depression is a severe neurological disorder associated with disability, even to death.
Those who are sad are not depressed.
According to the DSM-4 (Diagnostic and Statistical Manual of Mental Disorders), major depression disorder (DDM) it is defined when, within 2 weeks, these symptoms occur: loss of interest, depressive mood, problems with appetite and weight loss or gain, sleeping disorders, problems with moving the boby, loss of energy, sense of guilt and worthlessness, difficulty concentrating, difficulty making decisions, suicidal or masochistic thoughts.
Many things, all together, which also make the patient unable to manifest the problem and ask for help.

But worse than the symptoms, there are the causes. Yes, because to solve the problem the best thing is to go to the origins; but the exact causes of DDM are not entirely clear.
The that is depressed, is our brain, and more precisely some of its functional areas.
To be exact, it is the limbic system, a neuronal formation that, communicating with other areas such as the gyrus, the hypothalamus, the hippocampus and the thalamic nuclei, it forms our emotional system that communicates with the prefrontal cortex, PFC (it's complicated stuff with weird names). 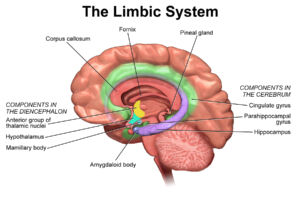 They communicate thanks to molecules called neurotransmitters that are "fired" by a neuron and captured by another neuron that has specific receptors. Neurotransmitters are for example Serotonin and Noradrenaline: when they are missing in these or in their respective receptors, something doesn't work anymore.

Due to severe stress for example, there may be hyperactivity in some areas of the limbic system which produce many neurotransmitters: these cause a hyper-reaction, and the compromised prefrontal cortex fails to reduce this effect and an inflammatory response occurs. Some areas increase in size, while others shrink, as neuroimaging experiments show. This causes a huge neuronal imbalance and enters a neurochemical loop.

So what does a walk in the woods have to do with it?? Well, before depression sets in, there are alarm bells and stress is certainly one of them. So yes, finding escape routes that relieve stress could be helpful, but not if we are already talking about DDM.
Other alarm bells can be the patient's personal history: as some studies show, having suffered abuse during childhood increases the likelihood of developing DDM. But genetics also play its part: for example, there is a predisposition to develop depressive disorder that depends on the genotype of the serotonergic receptors.

So once the woods are removed, there is nothing left? No, rather: there are antidepressants. Those, sometimes, they work. These are drugs that act on the serotonin reuptake system by increasing its concentration in the synaptic wall and therefore its availability for neurons.
In conclusion, it would be more acceptable to say to treat depression with dark chocolate, given the presence of anandamide, capable of activating endocannabinoid receptors and increasing the production of some neurotransmitters.