The climate has changed

The climate has changed, Time is up.

The twenty-sixth edition of the annual Conference of Parties (COP26), literally "Conference of the Parties ", starts this week in Glasgow (Scotland), in collaboration between the UK and Italy. The conference is held one year after the originally scheduled date, due to the COVID-19 pandemic, and it has ambituos goals ambitious to say the least. Of the COP we have already spoken a few months ago on the occasion of the return of the USA to’Paris Agreement, but perhaps it is appropriate to refresh the subject.

In summary, the COP has been organized every year since 1995 give her United Nations, as part of the fight against climate change by anthropogenic origin (that is, caused by human activities). There is now little doubt about the preponderant role of mankind in climate change: almost all the studies in this regard confirm this [1]. The delivery of the Nobel Prize to two scientists who have dedicated their careers to the study of the climate [2], in addition to Prof.. Giorgio Parisi, it is a further sign of the solidity of these results.

The last important result of the COP was precisely theParis Agreement of the 2015, ratified by almost all countries of the world. The process that led to the approval of the agreement was a masterpiece of synthesis and diplomacy, given the enormous effort served to reconcile the different positions of the various countries. The gravity of the measures included in the agreement are unprecedented in the history of the global fight against climate change. However, the really hard part starts now. In fact, the key aspects of the agreement [3] require that the promises be followed by i facts, but these at the moment are in hiding. 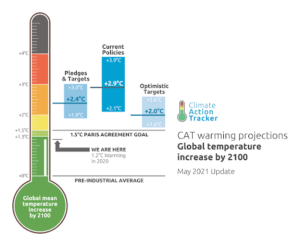 IMAGE: Indicator of the global average temperature increase expected in 2100, under the objective of the Paris Agreement (1,5°C), to the promises of individual countries (+2,4°C) and current emissions (2,9°C), plus an "optimistic" estimate (+2°C). Preso da Climate Action Tracker [4] .

Based on the simulations carried out by the current ones climate models, current emissions will lead us to almost 3 ° C increase in global average temperature compared to the pre-industrial period, that is, before human activities began to emit large quantities of greenhouse gases into the atmosphere.

The promises of the countries adhering to the Paris Agreement aim to limit the temperature increase to 2.4 ° C. Unfortunately this is not enough [5], because every decimal point counts. According to the Intergovernmental Panel on Climate Change (IPCC, Intergovernmental Group on Climate Change), an increase of more than 2 ° C entails enormous risks for us, both socially and economically. A greater number of extreme events, also caused by the global temperature increase, it is already occurring; many of these are related to human activities [6], such as the recent increase in fires and heat waves in various parts of the world. For all these reasons, the IPCC has published a specific report [7] on the importance of not exceeding the threshold of 1.5 ° C, which is precisely the main objective of the COP. 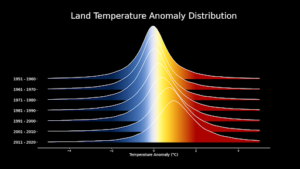 IMAGE: Change in the distribution of the global temperature anomaly over several decades, showing the increase in extreme values ​​in the "hot" part of the graph (who a video version). Preso da NASA Scientific Visualization Studio [8].

A more recent report [9] of the same IPCC (who a video summary in English) treads even further on the role of human activities in climate change and on the importance of act quickly to mitigate the most serious consequences, since we have already reached 1 ° C increase. Unfortunately, the inaction of governments and the main economic actors on the issue is bringing to light a new phenomenon that psychologists call "climate anxiety", especially between the youngest [10].

In this scenario, COP26 starts with a huge load of responsibility. Awareness of the problem has never been greater, but there is certainly the fear that even this opportunity will be lost.

Moreover, a well-founded fear, since after the small reduction it causes a pandemic [11], greenhouse gas emissions have recently started to gallop again [12].

It is therefore important that we continue to play the our role of citizens and consumers in calling for more initiatives from governments and companies.

Never as in this case, we are all in this together.

[3] Key aspects of the Paris Agreement

[6] Mapped: How climate change affects extreme weather around the world