The Great Green Wall: story of a rebirth

Recent climate change does not have the same impact anywhere in the world. In fact, there are regions that are most affected by its effects., both from a social and economic point of view. In general, we talk about an increase of heat waves, sea level rise and soil aridity, and an increase in diseases transmissible to humans. All of this could get worse in the future and the scenarios are certainly not positive.

If we weren't talking about global warming, you could say it doesn't rain but it pours. The worst effects of climate change are seen in developing countries. [1], both for their geographical position and for the lower ability to adapt. Nonetheless, developing countries are the least responsible for the ongoing climate crisis, given their small contribution in terms of greenhouse gas emissions. This is undoubtedly an ethical problem, linked to the concept of climate justice. The last world climate conferences have tried to tackle the problem, but there is a lot of reluctance on the subject by developed countries [2].

It is no wonder that many countries are starting to find solutions on their own.. One of the most remarkable initiatives is that of the Great Green Wall. The initial project involved a long "wall" of trees 8000 km to fight desertification, stretching from the Atlantic Ocean to the Indian Ocean [3]. The region is Sahel, in sub-Saharan Africa. Being squeezed between the Sahara and the savannah, Sahel is one of the regions most at risk from the effects of climate change, with consequences at a broader level in terms of migration and conflicts. 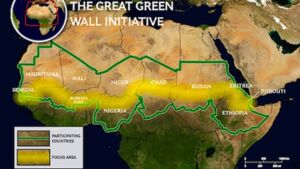 Area and countries involved in the project. Source: The Great Green Wall | GEF.

Of course, there have been problems [4]. First of all, the funds allocated were not sufficient to complete the project. Second, precipitation patterns in the region are changing, so it is not easy to understand where to plant the trees so that they grow and survive at best. We must also take into account the economic activities of the local population, mainly related to agriculture and herding; in fact, all the social and economic repercussions of the project must be carefully evaluated.

Also, there was a large group of people arguing that the initial project was not addressing the problem in the right way. [5]. Planting and growing so many trees in that region is impossible; the local climate does not allow it. Moreover, many areas are uninhabited, so no one can follow the growth of trees constantly. In fact, the best solution to desertification had already been found by local farmers., thanks to the skillful collection of water and the conservation of biodiversity in their fields. The project has therefore transformed over time from a utopian expanse of trees to a mosaic of virtuous land management practices.

According to a UN report of the 2020, almost 18 millions of hectares have been restored [6]. We can already see the first positive effects, especially in Ethiopia, Niger and Eritrea, with an increase in vegetation density and crop yields, and a reduction in soil degradation. As a side effect, this has also led to reforestation in the affected areas. The goal for the 2030 is very ambitious: restore 100 millions of hectares of degraded land across the region, thus contributing to the absorption of millions of tons of CO2 from the atmosphere and ensuring food for millions of people.

A similar initiative was made in China [7], where the Gobi Desert is advancing more and more in the northwest of the country. Started in 1978, the Chinese project has already planted 66 millions of trees and aims to get to 88 millions in 2050. However, it is not easy to understand if the project is actaully succeding against desertification, with many trees dying shortly after being planted and others requiring more water than is available. Surely the frequency of sandstorms has decreased in many of the affected regions, but it will take time to see the long-term effects.

[3] A wall of 8 thousand km in Africa to stop the advance of the desert: the Great Green Wall

[5] The “Great Green Wall” Didn’t Stop Desertification, but it Evolved Into Something That Might | Science| the Winter Olympics Will Have Nowhere to Go