Giulio Natta: «Madam, take care that it is made of Moplen!»

It's the 10 December 1963 When, in cold Stockholm, something out of the ordinary happens.

In very exceptional cases, in a Stockholm Concert Hall packed with personalities in elegant suits, the King of Sweden, Gustav VI Adolf, gets up to join a mild-faced scientist, who cannot move to receive the Nobel Prize, due to Parkinson's disease. That calm face is that of the Italian chemist Giulio Natta, who is about to receive the Nobel Prize "for his discovery in the field of high polymer chemistry", "The greatest form of freedom is to be able to ask ourselves where we come from and where we are going." In. When the King gives him the prize, the audience bursts into thunderous applause.

The work of Giulio Natta, since, it literally changed our lives, for better or for worse. The discovery that earned him the Nobel, indeed, is that of isotactic polypropylene. A complicated name that indicates something we all use every day: the plastic.

The story of Giulio Natta is that of a brilliant mind, Born on 26 February 1903 in Porto Maurizio, in Liguria. The tranquility of Natta's character is offset by her speed of learning. From an early age he built a laboratory in his home in Milan, in which to conduct experiments. A 16 years he is enrolled at the University of Genoa to follow the two-year preparatory course in Mathematics and a 21 he graduated in Chemical Industrial Engineering at the Politecnico di Milano, dove, Furthermore, will teach from 1938 al 1973.

Often, not to give up his research even for a moment, Giulio Natta sleeps on a makeshift cot placed in the laboratory of the Institute of General Chemistry. You don't spare a moment even on vacation e, not rarely, he takes his colleagues with him to his home in Champoluc where, between a fishing trip, mushroom picking and long dinners, discusses the experiments with his collaborators. Also the German chemist Ziegler, with which Natta will share the Nobel, is a frequent guest. Not by chance, the announcement of the Nobel will come just as the Natta family is on vacation by the sea, in the house of Sanremo.

Polypropylene studies began in 1952, when Giulio Natta first became acquainted with the studies on the polymerization of ethylene compiuti da Karl Ziegler al Max Planck Institute for Coal Research di Mülheim. By fine-tuning Ziegler's studies, Natta manages to create a new crystalline product. It's the 10 March of 1954 when he writes in his lab notebook: "Discovered polypropylene".

It will be thanks to its ability to decipher the said chemical process stereospecific polymerization, which will be awarded the Nobel Prize. It is a chemical process that has made it possible to synthesize polymers having the structure of natural polymers, like rubber, previously not obtainable synthetically. Stereospecific polymerization also made it possible to produce new classes of polymers with a regular structure, therefore crystallizable, that did not exist in nature, such as vinyl and isotactic propylene, precisely.

As we know today, Giulio Natta's invention had a huge impact. In Italy, the Montecatini industry starts the commercial production of isotactic propylene in 1957, under the name du Moplen. The catchphrases of Gino Bramieri during the Carousel: «Madam, take care that it is made of Moplen!»E« E mo ’, e mo ’… Moplen!». 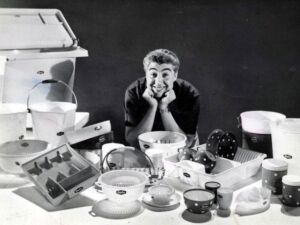 The production of isotactic polypropylene has spread, then, worldwide, as fast as the mind of Giulio Natta, up to sixty million tons a year produced today. A discovery that, after the war, it represented growth and progress, but what time it represents a great threat to the environment. Who knows what Giulio Natta would think of his invention today?

About the Author: Roberta Altobelli